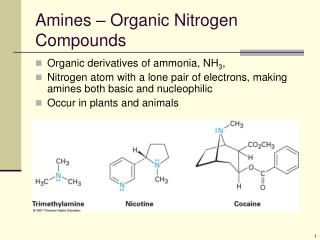 Amines – Organic Nitrogen Compounds. Organic derivatives of ammonia, NH 3 , Nitrogen atom with a lone pair of electrons, making amines both basic and nucleophilic Occur in plants and animals. Why this Chapter?. Amines and carbonyl compounds are the most abundant and have rich chemistry Chemistry of Lipids - . chemistry of lipids. definition: - lipids are organic compounds formed mainly from alcohol and

ORGANIC - . carbon. organic chemistry is the study of the chemistry of carbon compounds containing hydrogen . the

Amazing World of Carbon Compounds - . introduction. at the beginning of 19 th century organic compounds were defined as