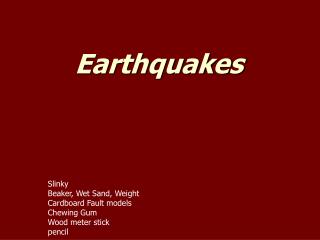 Earthquakes. Slinky Beaker, Wet Sand, Weight Cardboard Fault models Chewing Gum Wood meter stick pencil. What is an earthquake?. An earthquake is the vibration of Earth produced by the rapid release of energy Energy radiates in all directions from its source, the focus Ground-Motions for Regions Lacking Data from Earthquakes in M-D Region of Engineering Interest - . most predictions based

How and why does subduction occur? - . convergence one plate sinks beneath the other dense oceanic crust sinks into

Earthquakes and Volcanoes - . earthquakes. an earthquake is the shaking and trembling that results from the sudden

Earth Shakes, Rattles, and Rolls - . plate tectonics volcanoes earthquakes. what is the relationship between the

Survey of Short Fiction Review - . “there will come soft rains” is set in what american state?. california. what