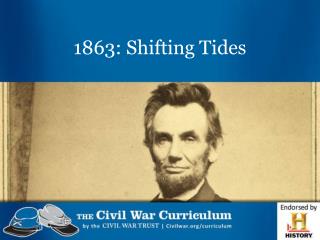 1863: Shifting Tides. Shifting Tides. At the top of your Timeline and Map W orksheet is a chart listing the battles including their location and date. Activity Place the events on the timeline in chronological order . 1861. 1863. The Esophagus - . historical aspects. the earliest esophageal procedures were limited to the cervical region (removal of

Jeopardy - . choose a category. you will be given the answer. you must give the correct question. click to begin. click

Patterns in Time of Extreme Tides and Sea Level Rise over The 21 st Century: Puget Sound and the Other Marine Waters of

CHAPTER 26 CLIMATE CHANGE WHEN THE TREES LEAVE Scientists grapple with a shifting climate - . 26. when the trees leave

Reconstruction (1865-1876) - . eu: how did reconstruction leave behind a deep legacy of racial and sectional bitterness?

Shifting Our Mindsets and Our Actions from Remembering HOW to Understanding WHY - . steve leinwand tmc14 – jenks, ok