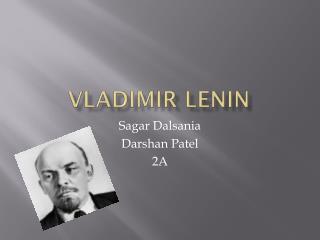 Vladimir Lenin. Sagar Dalsania Darshan Patel 2A. Early Life. He exceled in studies and students alienated him for that. ( Essortment ) In 1886, his father died and in 1887 his brother was hung for plotting to assassinate Tsar Alexander III. ( Essortment )