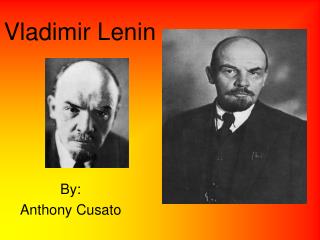 Vladimir Lenin. By: Anthony Cusato. Early Life. Lenin was born on April 22 nd , 1870 in the town of Simbirk (now Ulyanovsk) His real name was Vladimir Ilyich Ulyanov He adopted the name Lenin in 1901, this may refer to the Lena River in Siberia Vladimir Lenin - . lenin was born april 22 1870 in the town of shimbrisk. his dad was a teacher and his mom was a

Vladimir Lenin - . sagar dalsania darshan patel 2a. early life. he exceled in studies and students alienated him for

Vladimir Lenin - “if it were necessary to give the briefest possible definition of imperialism, we should have to say

Vladimir Illyich Ulyanov Lenin - “a revolution is impossible without a revolutionary situation; furthermore, not every

What impact did Vladimir Lenin have on Russia? - . as the leader of the bolsheviks , he promised “peace, bread, and

The first communist revolution occurred in Russia in 1917. Vladimir Lenin was - The first dictator of this new social