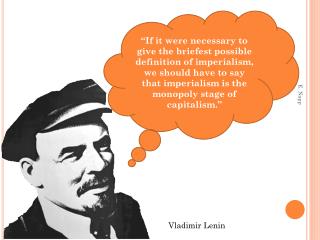 “If it were necessary to give the briefest possible definition of imperialism, we should have to say that imperialism is the monopoly stage of capitalism.”. Vladimir Lenin. Vladimir Lenin - . lenin was born april 22 1870 in the town of shimbrisk. his dad was a teacher and his mom was a

Vladimir Lenin - . sagar dalsania darshan patel 2a. early life. he exceled in studies and students alienated him for

Vladimir Illyich Ulyanov Lenin - “a revolution is impossible without a revolutionary situation; furthermore, not every

What impact did Vladimir Lenin have on Russia? - . as the leader of the bolsheviks , he promised “peace, bread, and

The first communist revolution occurred in Russia in 1917. Vladimir Lenin was - The first dictator of this new social