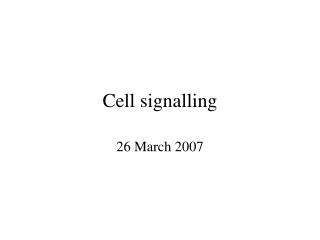 Cell signalling. 26 March 2007. Overview. No cell lives in isolation In all multicellular organisms, survival depends on an elaborate intercellular communication network that coordinates the growth, differentiation, and metabolism of the multitude of cells in diverse tissues and organs. Signalling - . experiment game. we ran an experiment on what is called the beer-quiche game (cho &amp; kreps, 1987).