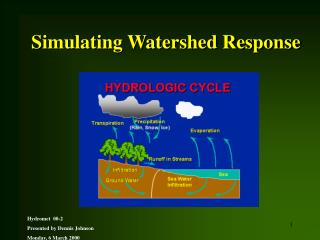 Chapter 11 - . infiltration, streamflow and groundwater. watershed: the area that contributes to a river or stream

CAGAYAN AND TAGOLOAN RIVER BASINS - . the bio-physical profile of the cdo river watershed: the watershed defined. from

Dose-Response Concept - . assumptions in deriving the dose-response relationship. the response is due to the chemical