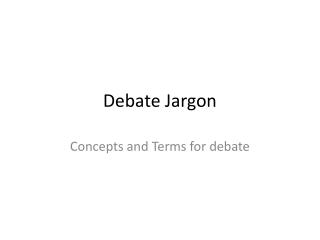 Debate Jargon . Concepts and Terms for debate. Prima Facie is a latin term borrowed from the legal system which means "on first appearance." Basically a prima facie case is a complete justification for my plan. . Jargon - . jargon is any language that acts as a barrier rather than a pathway to communication. the expression is

Jargon - . jargon is defined as “language that is used or understood only by a select group of people.”. examples of

Assessment Jargon - . the who, what, where, why, when, and how of writing end-of-the-year reports. sarah todd director of

Iditarod Jargon - . perseverance. the act of persistence; activity maintained in spite of difficulties. fatigue. a loss

Iditarod Jargon - . the specialized or technical language (vocabulary) of a trade, profession, or similar group. musher.

(The Jargon Lexicon, watson-net/jargon/lexicon.asp) - Hacker ( noun) : a person who enjoys exploring the details of

Jargon and DevelopmentSpeak - . what is jargon?. special language used in business, science, government, and development

Graduate School Jargon - What is graduate school jargon? find out in this presentation and also read an article

Communication Jargon Review - . 1. what is the term for a special language of a particular activity or group?. 2. what is