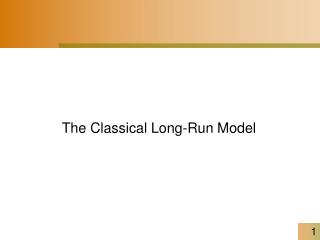 The Classical Long-Run Model. Classical Model. A macroeconomic model that explains the long-run behavior of the economy Classical model was developed by economists in 19th and early 20 th , to explain a key observation about economy The Classical Long-Run Model - . economists sometimes disagree with each other actually much more agreement exists among

The Classical Long-Run Model - . classical model. a macroeconomic model that explains the long-run behavior of the

LONG RUN - . a period of time over which the number of firms in an industry can change their production facilities. in

Short-Run vs Long-Run - . national accounts. think about canadian gdp over last 50 years here it is if you had to draw it

Long-run equilibrium - . lras (long-run aggregate supply) is at a level of output that corresponds to equilibrium in