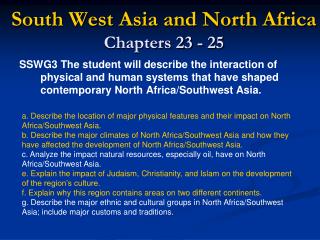 North, West, Central &amp; South Africa - . north africa. one of the greatest cities of ancient africa is known as

South West Asia - . the “middle east”. why is southwest asia called the middle east?. it was in the middle of the

Chapters 23, 24 and 25: - . cultural geography of south asia. south asia: the land. is a subcontinent because its

North Africa and Southwest Asia - . land and history. much of northern africa and southwestern asia is desert (look at

Southwest Asia and North Africa - . golan heights and the west bank. occupied by israel in the 1967 war, the golan