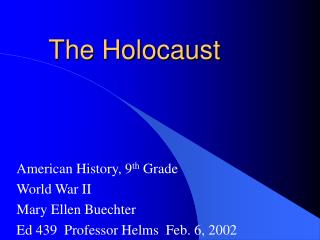 The Holocaust. American History, 9 th Grade World War II Mary Ellen Buechter Ed 439 Professor Helms Feb. 6, 2002. Objectives. At the end of this section you will 1. Have a general understanding of the Holocaust 2. Learn factual information about the Holocaust