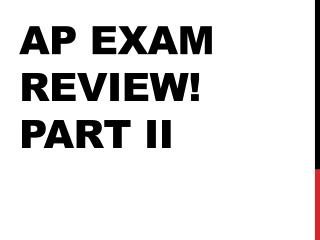 AP EXAM REVIEW ! Part II. #2 The road to Independence (1750-1781). The road to independence. In 1754 the colonists still considered themselves English subjects Very few could have imagined circumstances under which they would leave the British Empire AP Government Mid Term Exam Review Part Two - . what is the difference between capitalism and communism?. what is the