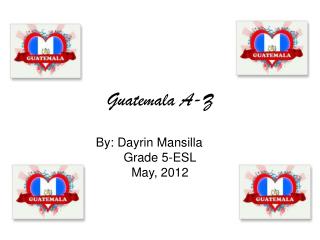 Guatemala A-Z. By: Dayrin Mansilla Grade 5-ESL May, 2012. A is for Animals. Guatemala has many different animals: Quetzal Scarlet Macaws Toucans Manatees. B is for Bordering Countries. The countries that border Guatemala are: Mexico Belize Honduras El Salvador. Guatemala: - . process of customs modernization and transparency. 2004.2007. guatemala. the largest economy in central

Guatemala - . amber bishop. location . is located in central america at the southern tip of the caribbean sea and the

Guatemala - . david best period 4 35151. flag and map of guatemala. how to dress for business. for business, a