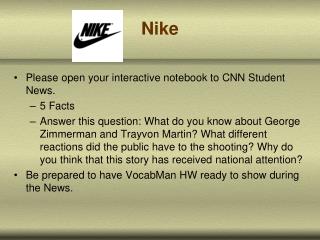 Nike. Please open your interactive notebook to CNN Student News. 5 Facts Answer this question: What do you know about George Zimmerman and Trayvon Martin? What different reactions did the public have to the shooting? Why do you think that this story has received national attention?