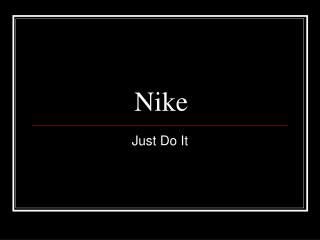 Nike. Just Do It. Before There Was Nike. 1948-Bill Bowerman is hired as University of Oregon’s track coach (1948-1973) 1957-Bowerman meets Phil Knight, a runner on his track team 1962-Knight writes research paper at Stanford, goes on trip, and Blue Ribbon Sports is born.