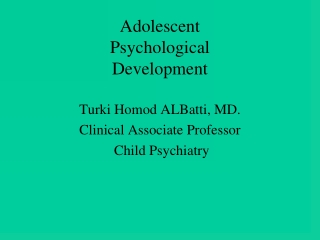 Biopsychosocial Development during Adolescence - 2. objectives. review the evolution of the concept of adolescence, and

Symptoms/Side-Effects may include: - K2/spice products - a mixture of herbal/spice plant products sprayed with potent

Psychological Disorders - . psychology 12. what is normal?. what are examples of “normal” adolescent behaviour?

Psychological Foundation Of Curriculum Development - . psychological consideration constitutes one of the most important

Growth and Development of the Adolescent: 11 to 18 Years Chapter 27 - . learning objectives. state the ages of the

Adolescent Development - . february 12th, 2009. interview write-ups. outline of key elements is in syllabus! include… a