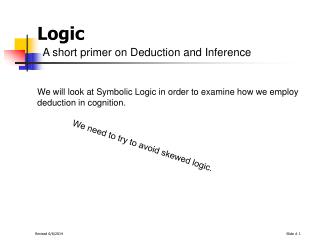 Logic. A short primer on Deduction and Inference. We will look at Symbolic Logic in order to examine how we employ deduction in cognition. We need to try to avoid skewed logic. Logic. What is Logic?. Logic For CS/Math Types: from Factasia 2. ARISTOTELIAN-MEDIAEVAL LOGIC - . classical logic deals with statements of the form s is p where s is the subject and p