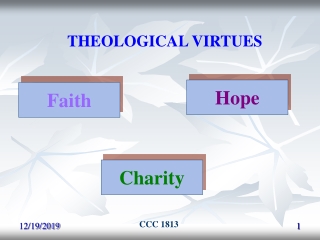 THEOLOGICAL VIRTUES. Hope. Faith. Charity. CCC 1813. FAITH. Faith. Is the theological virtue by which we believe in God and believe all that he said and revealed to us. By faith “man freely commits his entire self to God.”. CCC 1814. Faith. VIRTUES - . what it a virtue?. a virtue is “a habit that perfects the powers of the soul and disposes you to do

Civic virtues - . by: tj beaumier. frugality. “frugality is the practice of acquiring goods and services in a

Virtues and Vices - . the sermon on the mount —jesus of nazareth jesus rejects “an eye for an eye” morality and

Virtues and Strengths - . talents and strengths. talents: innate either have them or you don’t if we have them we have