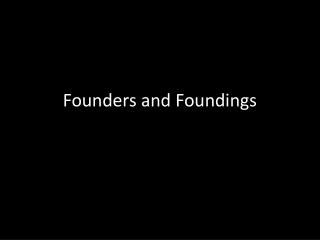 Our founders and associates - . international institute of molecular and cell biology (iimcb) institute of biochemistry

Mughal Empire and its founders - . the transition from sultanate to mughal period c. 1500s. the integration of south

Our vision, aims and founders - . our

Founders and Pioneers of Sociology - . chapter 1 section 2. the development of sociology. emerges in the 1800’s in