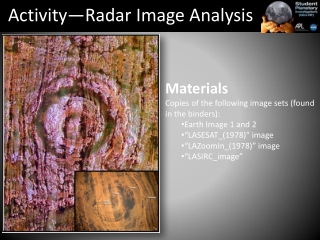 The Invisible Radar Triangle - . image source: us air force, http://www.af.mil/photos/media_search.asp?q=isar. what is

Doppler Radar - . 17.4. doppler radar. the computer that's a part of a doppler radar uses the frequency changes it show

RADaR - . putting your writing through the “radar”…. think &amp; respond: what steps were taken to get from the

The Rains of September, 2009 - . by rusty sturken. image from http://www.eontarionow.com/images/rain.jpg. local radar.