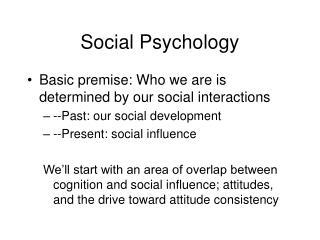 Social Psychology. Basic premise: Who we are is determined by our social interactions --Past: our social development --Present: social influence We’ll start with an area of overlap between cognition and social influence; attitudes, and the drive toward attitude consistency. Psychology 312-1 - . physio logical basis of behavior jp-rosenfeld@northwestern.edu. this is a psychology course….

AP PSYCHOLOGY Review for the AP Exam Chapter 1-4 - . psychology: the science of behavior (what we do) and mental