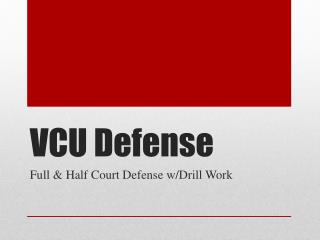 VCU - . seth joyner. history. originally the richmond division of william and mery and later in 1967 joined with the

VCU - CPED principles - . provides field-based opportunities to analyze problems of practice and use multiple frames to

History of VCU - . vcu’s founding date was 1838, from the year the medical college of virginia was created as the

VCU-RRTC Webcast - . marketing and job development: the business side of the process by karen flippo. marketing. exchange

VCU School of Dentistry - . preceptorship programs kim t. isringhausen, director. what is a