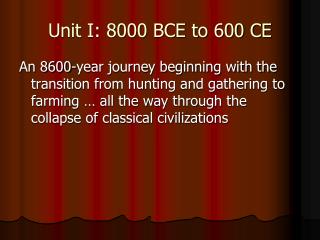 Unit I: 8000 BCE to 600 CE. An 8600-year journey beginning with the transition from hunting and gathering to farming … all the way through the collapse of classical civilizations. Before History. What is the technical term for the “old stone age?”. Before History. Paleolithic Society.

HIGHER – ADDITIONAL QUESTION BANK - . please decide which unit you would like to revise:. unit 1. unit 2. unit 3.

Unit Hydrographs - . transforming the runoff. unit hydrograph theory. moving water off of the watershed… a mathematical