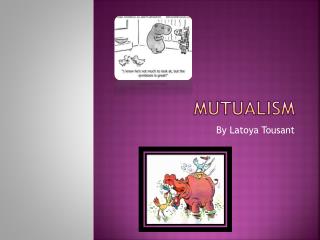 Mutualism. By Latoya Tousant. What is Mutualism?. Mutualism is defined as: interactions between individuals of different species, one where participating partners benefit. Some Examples of Mutualism. Plant Mutualisms: Plant; bacteria, fungi, and animals.