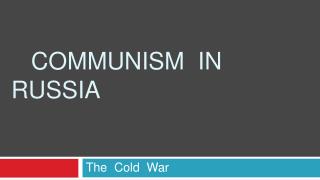 Communism In Russia. The Cold War. Communism. Government system that controls all things Controls all money Controls all work Controls all institutions (hospitals, education, etc…) There are no individual rights!. Communism: Philosophy. From each according to Ability Russia after Communism - . post-soviet russia after the collapse of the soviet union in 1991, the various republics

A brief history of communism in Russia - Russia at this time was being poorly managed by a czarist government, ... in

A Brief History of Communism in Russia - . mid 1800’s – capitalism flourishing in europe and america. profits were

Communism in China - . communism -a political system in which the government owns all property and dominates all aspects

Communism in Australia - . how did the australian government deal with the “threat” of communism?. fear of communism.