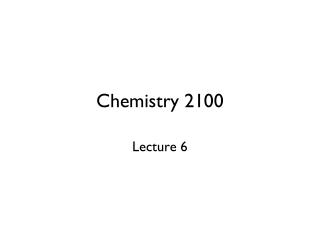 Chemistry 2100. Lecture 6. Carboxyl Derivatives. In this chapter, we study three classes of compounds derived from carboxylic acids; anhydrides, esters, and amides. Each is related to a carboxyl group by loss of H 2 O. acyl [ acetyl = Ac: R = CH 3 ]. Esters. Chemistry 2100 - . lecture 5. nomenclature. iupac names for aldehydes to name an aldehyde, change the suffix - e of the

Chemistry 2100 - . lecture 8. enantiomers. enantiomers: nonsuperposable mirror images. as an example of a molecule that

CLA 2100 - . exam review. how to study. a word to the wise: if you wait to study until the last minute, your grade will

Casio CTK-2100 - The casio ctk-2100 is a popular musical keyboard for beginners. it is loaded with features and priced on