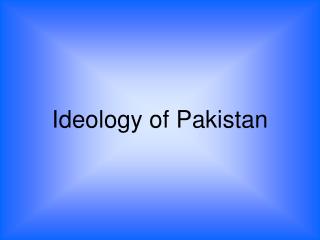 Ideology of Pakistan. Meaning of Word `IDEOLOGY`. Science of Ideas. The study of the origin. Evolution and nature of idea. (Antoine Destul De Tracy) “ A French Philosopher”. Definitions of Ideology. Ideology of Pakistan - . what is ideology. ideology is a french word. here's what webster's dictionary gives us for