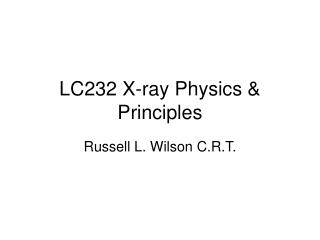 LC232 X-ray Physics & Principles. Russell L. Wilson C.R.T. Week 1a Chapter 1 Concepts of Radiologic Science. Our Surroundings. Everything in the universe can be classified as matter or energy . Matter is anything that occupies space and has a shape or form.

Radiology of Fracture Principles - . suzanne o’hagan 18 may 2012. radiographic principles. when analysing and ordering