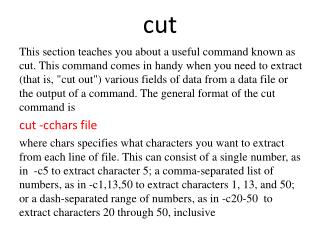 cut. This section teaches you about a useful command known as cut. This command comes in handy when you need to extract (that is, "cut out") various fields of data from a data file or the output of a command . The general format of the cut command is cut - cchars file Graph-Cut / Normalized Cut segmentation - . jad silbak -university of haifa . what we have, and what we want:. most

LINO CUT - . by murtaza hasan . what is a lino cut

Cut Gaskets - Cut gasket ( http://www.americansealandpacking.com/sheetgasketing.ht ) is an excellent product for use in

Vertex Cut - . vertex cut: a separating set or vertex cut of a graph g is a set s v(g) such that g-s has more than one

Endonuclease cut - Homologous recombination. 5’. two homologous ends align, they rotate so that bottom strand of the