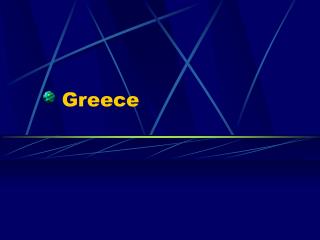 Greece. Olympics. The most famous event that the Ancient Greeks are known for are the Ancient Olympic Games. The Ancient Games are not like the games we know today. Many of the sports were different than the ones we have today. The sports that do remain are typically have different rules. .

Greece - . packet notes pages 9—13 of greece packet. slide 1. directions : use this powerpoint presentation to fill out

Greece - . greece. home to one of the world’s oldest civilizations, greece has been called the birthplace of western

Greece - . greece is a european country located on the balkan peninsula mediterranean coastlines touches borders with

Greece - . by: jon apostolopoulos. where is it?. located in southeastern europe greece is 1,500 miles from england. here

Greece - . by danny sun . language. in the greek alphabet there are only 24 letters. most words we speak come from greek.

GREECE - . by: brayden thompson. introduction. in the next few slides i am going to teach you about greece. i hope you