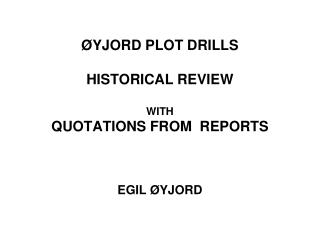 ØYJORD PLOT DRILLS HISTORICAL REVIEW WITH QUOTATIONS FROM REPORTS. EGIL ØYJORD. Acknowledgement. The History of Øyjord Plot Drills would not have been presented in such an excellent way without the work of Torbjorn Leuchovius.

Writing with Quotations - . learning objectives. recognize and use different types of quotations choose and place

Unit 1 – “The Last Dog” - . learning goals. read for comprehension and analysis, with a focus on plot, setting ,

Quality of Forensic Reports: An Empirical Investigation of Three Panel Reports - . presented at the annual forensic

Listen: I’m My Own Grandpa - . on wed., march 19, we’ll review material covered so far in this class. you’ll get