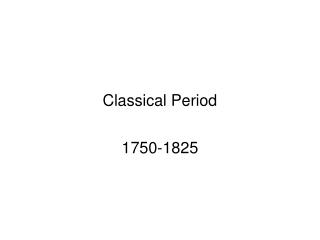 Classical Period. 1750-1825. Sonata Cycle. Four movement plan common in symphonies, sonatas, and other works of the Classical period - FSDF. Sammartini Symphony. First Movement An immature version of Sonata Allegro Form Exposition is repeated, and has two themes, but they are very short