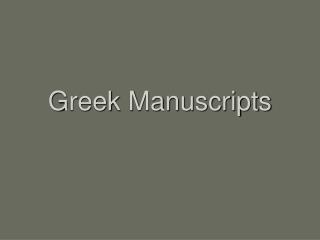 Greek Manuscripts. Papyri. Paper made from strips of papyrus reed. Cheapest, most plentiful writing material – most fragile. Two layers of papyrus strips laid at right angles, pressed together, and dried. Sheets pasted side-by-side and rolled into a scroll. Characteristics of all living things is that they all use… - . energy. two ways organisms get their energy (food).

Physical science unit 2 - . greek thinkers, such as democritus. he called nature’s basic particle an atom, based on the