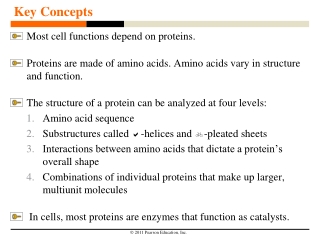 Key Concepts. Most cell functions depend on proteins. Proteins are made of amino acids. Amino acids vary in structure and function. The structure of a protein can be analyzed at four levels: Amino acid sequence Substructures called  -helices and  -pleated sheets