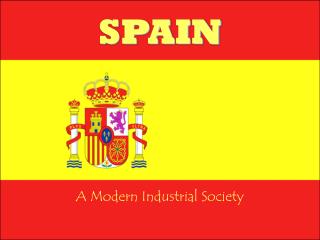 SPAIN. A Modern Industrial Society. Spain is an industrial society located in Southwestern Europe, bordering the Bay of Biscay, the Mediterranean Sea, the North Atlantic Ocean, and Pyrenees Mountains. It borders France to the north and Portugal to the west.