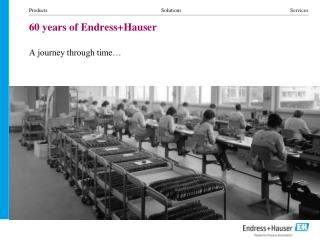 60 years of Endress+Hauser . A journey through time…. 1 9 53. Birth certificate: With a starting capital of only 2.000 Deutsch mark, the ‘L Hauser KG for sale of Fielden-Endress’ electronic devices’ has been established in 1953. The company’s name came from Ludwig Hauser’s wife Luise. . 1955. 60 years of Independence - . places in israel. match the words to the pictures. the dead sea. dome of el akza. western

Celebrating 60 Years - Israel and the american cyrus. celebrating 60 years. one of the “proudest moments” of my life.

60 YEARS OF OUR INDEPENDENCE - . introduction.

60 Years of the Western - . a quick look at 6 decades of the western neurosurgical society a 10 minute talk -- plus time

The Evolution of Communication - . marc d. hauser. introduction. “nothing would work in the absence of

Celebrating 60 years of Science for Peace - Cern, the european organization for nuclear research, is celebrating its 60

Present’s “60 Golden years” Of Indian Cinema - . present’s. about the