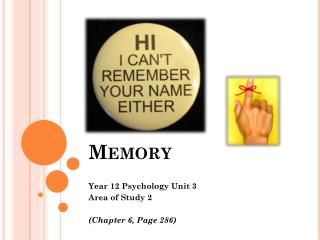 Memory. Year 12 Psychology Unit 3 Area of Study 2 (Chapter 6 , Page 286). Neural Basis of Memory. Memories are not stored in one specific brain location; they are stored throughout the brain and linked together by neural tracts (interconnected neurons). Memory Errors, Memory Gaps - . reasons why we remember so much and so little at the same time. semantic activation

Memory - . persistence of learning over time via the process of encoding, storage, and retrieval of information. memory.

Memory - . or a lecture you’re sure not to forget. memory. the atkinson-shiffrin model . the environment. sensation.

Memory - . overview. how are memories important? how do memory systems work? how can you improve your memory?. memory as

Memory - . chapter 6. what is memory?. memory is the system by which we retain information and bring it to mind. without

Memory - . evaluate two models or theories of one cognitive process with reference to research studies. we will be

Memory - . memory: the storage, retention and recall of events, information and procedures. i. early research on memory:

Memory - . chapter 7a. memory. the ability to remember things we have experienced, imagined, or learned memory is often

Memory - . the phenomenon of memory. 5 minute quick write . in your notes, list all of the things you would not be able

MEMORY - . by shirmeen ijaz. what is memory?. according to feldman, “ t he capacity to record, retain and retrieve

Memory - . points to remember:. the short-term memory can hold from 5 to 9 items or words at a time. most people can hold