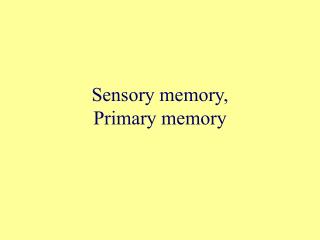 Sensory memory, Primary memory . Today. Sensory memory and its characteristics Working memory--a specific model of primary memory. We’ve talked about perception. . . how much of what you perceive and attend to do you remember?. Example. Pick a card, any card. Concentrate. . Primary Memory - . questions for this section. is there more than one kind of primary memory? what is the capacity of

Stage 1 – Sensory Memory - . immediate initial recording that comes in through the senses. all the senses have sense

Sensory and Working Memory - . sensory memory. the sensory register is a memory system that works for a very brief period