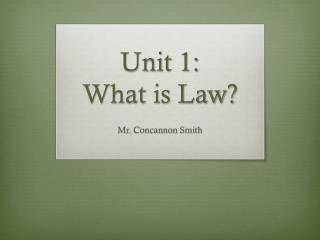 Unit 1: What is Law?. Mr. Concannon Smith. Do Now. List 10 of your daily activities (for example, waking up, eating, etc.). Next to each item, list any laws that affect that activity. What is the Purpose of each law you identified? Would you change any of these laws? Why/why not?.