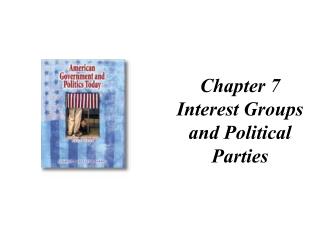 Chapter 7 Interest Groups and Political Parties. What is an Interest Group? an organized group of individuals who share common goals or objectives who attempt to influence policymakers in all three branches of government, and at all levels Chapter 7 and 8 (parties and interest groups) - I. political organization – parties and groups that function as