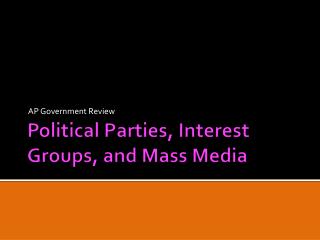 AP Government Review. Political Parties, Interest Groups, and Mass Media. Linkage Instutions. We use these to express our preferences regarding the development of public policy Aka: INFORMAL INSTITUTIONS OF GOVERNMENT These institutions include: Political parties Elections The media