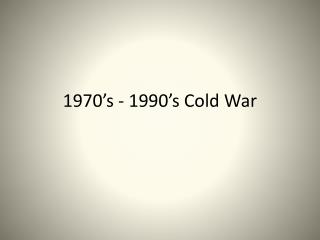 1970’s - 1990’s Cold War. Detente. After Khrushchev was ousted from power Leonid Brezhnev ruled as Premier from 1964-1982. His economic reforms continued the failure of communism, but he did adopt a policy of Détente (understanding) with the U.S. and Western Europe. SALT Talks. America Confronts the Post-Cold War Era - . chapter 41. introduction. the collapse of the soviet union and the

The Cold War - . objectives. p. 127. whii.13 the student will demonstrate knowledge of major events in the second half of