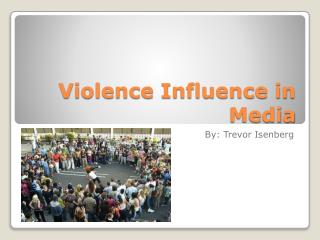 Violence Influence in Media. By: Trevor Isenberg. Media Violence is everywhere you look, on every channel, every commercial, and every video game. Meaning that children and adults alike are being influence into thinking violence is funny and fun when that's clearly not the case. Violence in Media - . by gareth steinke.

Violence in Media - . mashood sabir , hasan mayda , nischal sharma, alison han. issue: is there too much violence in the

Violence in Media - . impact on

Media Influence - . does the media have power? how much? what form does this power take?.

Media Influence - . by: maria. what is it?. media influence is a negative or positive impact on peoples lives. you can

Media Influence - . ‘one should be cautious in adopting a new kind of poetry or music, for this endangers the whole

Media Violence - . well…?. does violence in the media have an effect on wider society? if so, how far-reaching could

Violence in the Media - . by: marisa, nick, victoria, and casey. research question. among college students, is there a

Media Violence - We are exposed to acts of violence everyday just by turning on a television. if a child watches 2 to 4

Violence In the Media - . `1. don’t let media take over your

Violence In The Media - . by: frankie belford. summary—research on violent television and films, video games, and music

Media Violence - . discussion questions. how do you define media violence? (what actions constitute violence?) do you