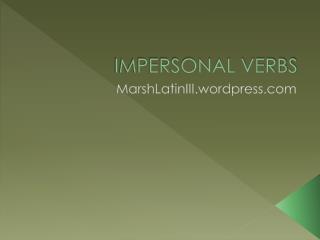 IMPERSONAL VERBS. MarshLatinIII.wordpress.com. What is an impersonal verb?. ATL II: Impersonal Verbs - . impersonal verbs are pleasing to me. . placet. you have seen the verb placet before. mihi

Impersonal “Se” - . ever seen a sign that says, se habla español. what does that mean? it can be translated, “we

Impersonal se - . used on signs and advertisements. se + (present tense verb) + noun the verb must agree with the noun.

‘Se’ impersonal - . use se to avoid specifying a person who is doing the action of the verb. se vende fruta en la

Uses of the Accusative and the Ablative Cases + Impersonal Verbs - . stage 28. uses of the accusative. so far, we have

The Impersonal “se” - . “se” can be used with the he/she form of a verb to signify the english subject pronoun

IMPERSONAL PASSIVE SENTENCES - . that clause to infinitive clause. it is said that. a common way of reporting what is

Confusing Verbs - . sit means “to be seated” or “to rest” past tense = sat there is not a direct object. set