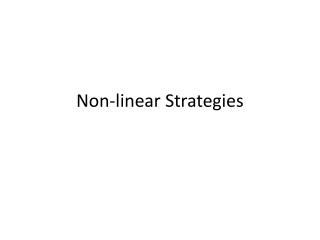 Non Linear Classifiers - . the xor problem. there is no single line (hyperplane) that separates class a from class b.

Non-linear regression - . all regression analyses are for finding the relationship between a dependent variable (y) and

Non-Linear Relationships - . residual plots. try this …. when discussing an association, we look at the following

Non-Linear Models - . non-linear growth models. the mechanistic growth model. many models cannot be transformed into a

Non-Linear PowerPoint - . allowing for interaction and choice. note that the following powerpoint allows interaction with