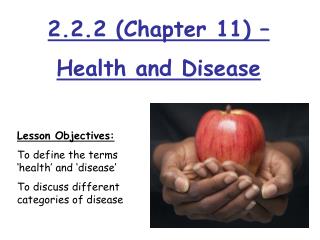 2.2.2 (Chapter 11) – Health and Disease. Lesson Objectives: To define the terms ‘health’ and ‘disease’ To discuss different categories of disease. So what is ‘health’?. What do we mean by ‘health’? What are the characteristics of health?. The Human Body in Health and Disease - . chapter 2. anatomic reference systems. describe the location and functions of

Health and Disease - . ocr as biology unit 2 module 2: food and health. learning outcomes. discuss what is meant by the

To “Pee” or not to “Pee”—the KIDNEY in health and disease - . “it is no exaggeration to say that the