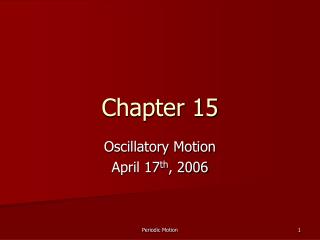 Chapter 15. Oscillatory Motion April 17 th , 2006. The last steps …. If you need to, file your taxes TODAY! Due at midnight. This week Monday & Wednesday – Oscillations Friday – Review problems from earlier in the semester Next Week Monday – Complete review. The FINAL EXAM.