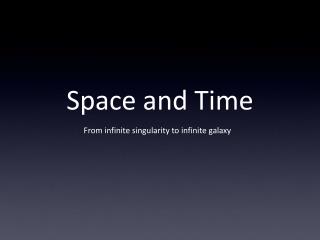 Space and Time. From infinite singularity to infinite galaxy. Time is…. A independent variable in our lab A period of a football game ? . . . Let’s see what Einstein's special relativity said about time:. Time begin with the big bang End with the black hole Space and Time - . by david r. maidment with contributions from gil strassberg and tim whiteaker. linking gis and water

Time and Space - . travelling through and around time and space – the possibilities and impossibilities. famous

Time and Space Complexity - . justin kovacich. what are they, exactly?. time complexity – the amount of time required

Time, Space, and City - Summary. introductionspatio-demographic and administrative profilesdiversity and

The Space and Time Perspective: - . geographical and historical backgrounds. here’s a question for you. which of the

Odyssee - time and space - Odyssey - . a guided tour through dutch educational history. on tour with