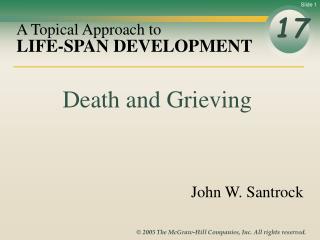 17. A Topical Approach to. LIFE-SPAN DEVELOPMENT. Death and Grieving. John W. Santrock. Defining Death and Life/Death Issues. Issues in Determining Death. Brain death —neurological definition of death All electrical activity of brain has ceased for a specified period of time LIFE-SPAN DEVELOPMENT - The self, identity, and personality. the selfidentitypersonality. self-understanding. self all

Life Span Development - . study of the changes that occur as people grow up and grow old from conception to death.

LIFE-SPAN DEVELOPMENT - 11. a topical approach to. life-span development. the self, identity, and personality. john w.